Widget not in any sidebars 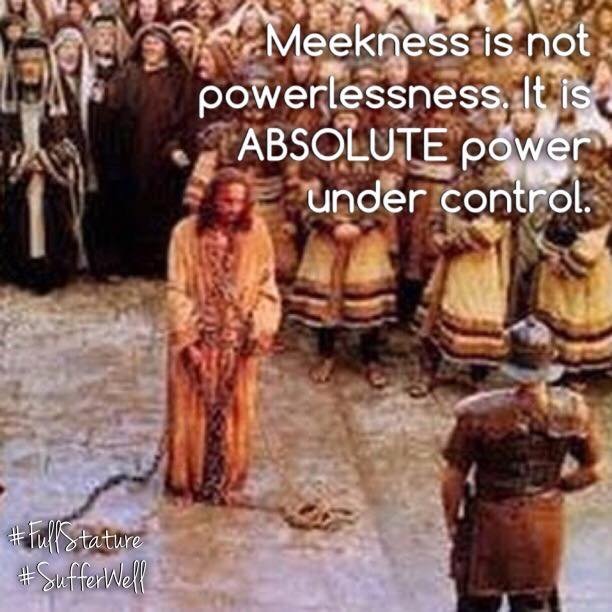 Humility, yes. False humility, no! Who told you that meekness meant weakness? Apologizing for things you did not do, or believing that everyone must like you. Who told you that humility was living in poor conditions, physically, spiritually or emotionally? Meekness is not powerlessness, but actually ABSOLUTE power under control; confident humility! There was one who once lived as a man who demonstrated ABSOLUTE power under control.

Abuse? Who told you that you are expected to take abuse as a sign of your love towards Yahweh? “But Yahshua said give your cloak and tunic. He also let them spit on Him and he even forgave them,” you say. Yes, this is correct, and He also “disappeared from their midst” several times when they tried to kill Him (Luke 4:30; John 8:59). He would “know His time;” He had ABSOLUTE power under control.

Get wisdom! Get understanding! Anything done with a heart (mind) that submits to the Father is powerful and correct. Find anywhere Yahshua apologizes, other than FOR you, saying, “Forgive THEM Father…” His sinlessness made it so apologizing would not be necessary. Who apologizes for holiness? That’s the point! Many claimed to be offended, harassed and hurt by Yahshua, but He knew better. He had ABSOLUTE power under control.

False humility stems from insecurity, and insecurity from rejection. And on and on it goes. Yahshua, in reference to being murdered on the stake, disregarded the shame, “for the joy set before Him” (Hebrews 12:2). His connection with the Father enabled Him to constantly remember the crux of all that He was asked to do, and all that stood in His way. It was Yahweh’s will that Yahshua would die for the sins of many. It gives Yahweh great pleasure to offer this death to you and me (Hebrews 2:10). Yahshua knew His Father’s heart, for it also gave Him pleasure to be our sacrifice. He also knew that serving the Father in such as capacity, with unabashed obedience, established Him as the authority over even those who called themselves His enemies. In reality, He was positioned with such prominence that He could have no enemies. Anyone or anything that would come against Him, could only do so with His permission. He had the ability to call on legions of Malachim at any time, yet He never did (Matthew 26:53). He had ABSOLUTE power under control.

He knew the principalities He dealt with and He knew man was inferior to anything the Father could perform on His behalf. He had no doubt. He forgave His murderers, you and me, with a whole heart. He did it with a sound mind. He chose it with no malice. He had ABSOLUTE power under control.

Let us give you an example, so it becomes practical for you. Someone makes a claim that you offended them when your intent was not to do so. The secure person, one close and connected to the Father and who understands humility, might say this. “I’m sorry you misunderstood. My intent was not to offend you. May I explain what I meant?” This person is not upset, nor harmed in any way by the misunderstanding. It ends right there for them. The insecure person, displaying false humility, might sound like this. “No, no. I’m sorry. I’m so sorry; I did not mean it like that. Please let me explain.” Their need to be affirmed and understood is no longer humility, but insecurity. They will continually apologize until they “feel” accepted again. They will carry that burden for days and weeks until they get what seems like resolve, though it never comes.

Yahweh is your security! Live close to Him and He will fill your heart with true humility, confident humility, which is ABSOLUTE power under control.